Educate To Ascend: Your Secret Success Tactic for Fundraising Websites

“If only they really understood the issue and what their donation’s impact would mean, then they would donate. They would ALL donate.” Have you ever muttered a version of this statement?

Pretty much every nonprofit fundraising professional has. And they want to do something about it! So they talk to the marketing crew to see how they are promoting the next campaign. They try to rework the budget to put more ad dollars toward the last set of Google Ads (because who has time to A/B test new ones?). They create new website content with fingers crossed this’ll be the blog post that does it.

People don’t know what they don’t know. What if, instead of putting bits and pieces of your mission and their possible impact on a Facebook status here and a web page there, you created a journey that told the whole story in a meaningful way?

All of the nonprofits we work with are doing truly great work, so when people understand the mission and the impact they could have, it becomes impossible not to support. If we take a step back, the impact doesn’t come directly from the dollar being donated, but from a type of person – a person who understands the mission on the same level as someone who is fully dedicated to it.

Why not make that your goal? To ascend people up the donor journey on an organic path to become loyal, lifelong supporters. But how do you ascend them? With education.

What is “Educate to Ascend?”

Educate to Ascend is our way of getting deliberate about creating a cohesive donor journey that increases both donations (size and number) and recurring gifts by putting the priority on (fully) educating the supporter. 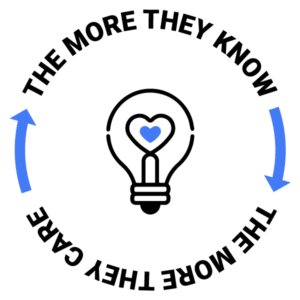 It is no secret that many volunteers go on to become the best donors.

We’ve heard it over and over again that getting people in the door of your nonprofit is the best way to secure them as supporters. It is why food banks and other nonprofits offer tours of their facilities, explaining what it is they do, why it is important, and how people can help. Those volunteers who were already on their paths as supporters were educated, and then they ascended into donors (or more generous donors).

But you can’t exactly give a tour to everyone who is interested. Or can you? This is where your website steps in.

With your nonprofit website, you can educate to ascend 24/7 by providing a resource about who you are, what you do and how they can help. But if you want someone to learn, you don’t throw random book pages at them and expect them to understand the information. You also don’t give a kindergartener a college textbook. Or vice versa. You meet them where they’re at, and engage them in a way that boosts them up.

The Educate to Ascend Donor Journey 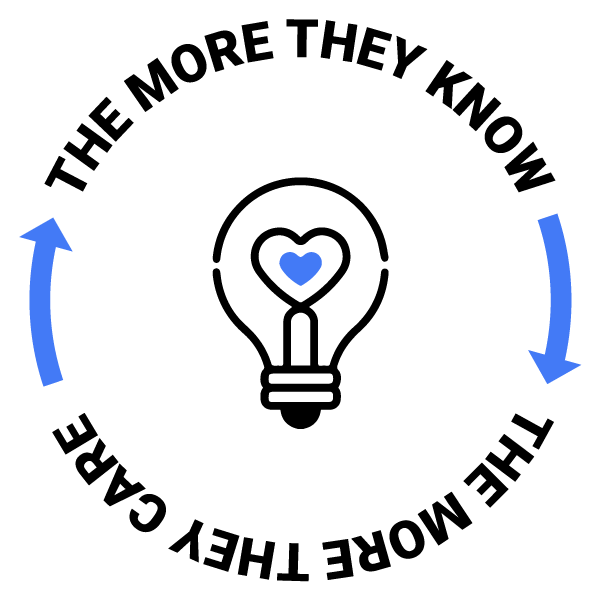 This is not a one-time thing though. The more you build on their education, the further they progress on their donor journey, and the closer they get to being lifelong supporters. For example, someone who is unaware of a food bank in their area might become curious when they hear that 1 in 8 children in their community are food insecure. But they won’t become engaged until they get an answer to the question every potential donor has: “Can I make a difference? I’m just one person.”

You wouldn’t answer that question with an hour long webinar explaining your budget allocations and long-term financial goals. You would keep it impactful, but digestible. You would provide information that built on their curiosity enough to get them to engage.

Now let’s say you answered that question sufficiently, and they made a $10 donation. This is worth celebrating, but when you reach out to them in 6 months about a new campaign, will you have a different answer to that question? What about a more thorough one?

Their Brains Reward Them for Learning

Science says you should. Not only will it keep them more engaged than if you shared old info or a truckload they aren’t ready for yet, but you’re giving them the opportunity to learn more – and a dopamine hit they will associate with your nonprofit. That’s right. It has been scientifically proven that learning something new rewards your brain with dopamine.  And the educate to ascend model utilizes this natural positive reinforcement to encourage the donor to keep moving up.

Back to the donor who made a one time gift – Instead of waiting, send a thank you email with an update on the impact they made. Then after a month or so, you could invite them to take an online quiz on the effects of hunger in their community. When the next campaign comes along, they might feel a little more empowered and obligated to donate, knowing what they can’t unknow. This time they donate $20, and you are in a better position to send them an email about becoming a recurring donor.

Now imagine if every donor had this experience. Whether they are a first-time donor, someone who has given periodically over the years, or a volunteer who has given up a Saturday every month for years, there is always something impactful they can learn that will boost their support of your mission.

And In Turn, They Reward You

By providing these types of experiences and creating a funnel based on the educate to ascend principles, you will find your people. And at the same time, it weeds out the ones who will never be loyal supporters. As hard as it is to imagine when you are living and breathing your mission, there will always be people who just can’t get on board.

Someone who is deathly afraid of the ocean likely won’t be the star supporter of an ocean-based nonprofit. Someone who’s worst childhood memories come from their Little League games might not be the target demographic for a sports-oriented approach to childhood health.

And that’s ok. While it would be amazing if every single person you had contact with turned into a legacy donor, the reality is that some people’s hearts will belong to another mission. Your goal is to indoctrinate the ones who could be on the path to yours, and Mittun’s goal is to empower you.

The same way you depend on your volunteer coordinators and fundraising event planners to curate experiences for potential supporters, you should be depending on your website to create the same experience. Try to look at your website with fresh eyes and ask if it is providing an educate to ascend experience for newcomers and old-timers, the curious and the indifferent.

The Educate to Ascend model uses a scientifically proven brain hack and a decade of web testing by Mittun’s ROI specialists to create more good in the world.

Want to Educate to Ascend your supporters? Contact Mittun today for a free consultation

Is your site ready for anything?