I love California. Sure, she has her faults (and sometimes shaky fault lines), but California holds some of the most spectacular beauty on this planet.

A couple weekends back I was lucky enough to return to some of this awe inspiring beauty. I joined up with my Mitten United team members, and we made our way to Lake Tahoe for the 10th annual Skate the Lake. This event, organized by Boarding for Breast Cancer (B4BC), is a 28-mile skateboard push. Teams and individual participants create fundraising campaigns before the event to raise money to fund B4BC’s amazing outreach and education programs. Team Mitt U was determined to keep the title of Top Fundraising Team as we have with previous B4BC events.

Since members of the Mitten Crew aren’t all in one location, we decided that the group of six would meet in Mammoth a day early just to break the trip up a bit. Shane and Melissa cruised up from Big Bear Lake. While Danny, Stacey, and Nate picked me up from LAX after my flight from the great Mitten state, and we all headed north.

The drive up into the Sierras is something everyone should experience. The jagged peaks still had pockets of snow on them! It’s a mind bending thought when you are standing in 100 degree desert heat while looking up at snow…

We stopped in Lone Pine for a pit stop, and so Nate could cruise the skate park for a few and we could all stretch our legs. Note to self: (when fitting four people, plus gear for three days, into a Honda Fit, frequent breaks with some physical exercise is highly recommended.) We arrived in Mammoth Thursday afternoon and decided a hike was in order. McLeod Lake was our choice, just outside Mammoth, and of course we took the required goofy group pictures and the selfies before hiking back.

The next day we started the remainder of the trip to Lake Tahoe for the registration party that evening, but we had some time to kill, so we decided to rent a couple tandem kayaks and spent an hour on June Lake. Best decision ever. The lake was crystal clear, the surrounding mountains were gorgeous, and everyone was smiling. The memory of that hour, the natural beauty of it, will stay with me forever.

When we arrived in Tahoe City at the registration party we were greeted by the amazing ladies at B4BC. We met up with Shane and Melissa and the Mitten Crew was complete! After signing the required forms and getting our goodie bags, we dove into the BBQ provided by Moe’s!

While the sun was setting Chuck Ragan performed up a solo-acoustic set for the lingering ‘Skate the Lakers’ and passersby alike. Every time I’ve seen a sunset in Lake Tahoe, it has seemingly been better than the last. The incredible hue of the water fading into mountains, and the mountains melting into the sky made an absolutely epic background for this acoustic show.

Now, every year there is a raffle at the registration party, and every year Shane wins a board, or two. This year was no different… the lucky punk walked away with TWO MORE Sector 9 boards!

The next morning came bright and early. A beautiful bluebird day in Lake Tahoe welcomed almost 100 skaters. But before we could begin our 28 mile push, we needed the obligatory safety speech, by the one and only, Curt Sterner. Curt has a special way of controlling and informing a crowd, especially one full of skaters, he is loud, and he laughs a lot. After hearing the word “electrolytes” about 100 times the skaters were finally set loose. 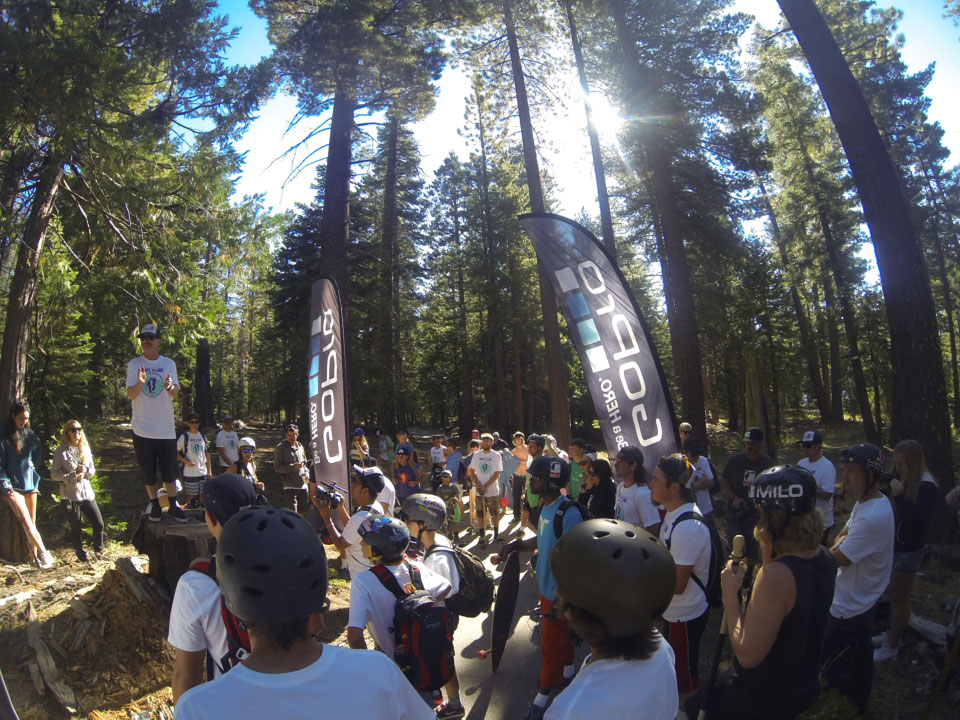 The beginning of the route is a decent winding downhill bike path that is always a highlight, but can be a little sketchy with the mass of people. Last year, I wiped out pretty good just after the first hydration stop, about six miles in. This year I proudly made it past the ten mile mark, and the bail was relatively harmless. A deep gap between sidewalk and bridge lead to my board stopping and me continuing on. My hands were a little tore up but not bad. My left thumb hurt, but that hand got it the worst, so I didn’t think much of it. Turns out after it still hurts and is swollen for a week it may be broken.

At the next hydration stop in Squaw village everyone was finding a shady spot to relax or grab a quick bite to eat. Jason from Cali Longboarders approached me about seeking out a beer as he had been right behind me when I went down and stopped to help me up. We grabbed a brew and sat with Chuck of Tahoe Longboards and talked a little bit about the history of Skate the Lake. It was Chuck and Curt who started it, and they did it for their moms who were both afflicted with breast cancer. To hear Chuck talk about it, for no more than a few minutes, was incredible for me. This fight became personal to him, so he decided to do something. That fire inside him to make a change for the positive was still so prevalent.

After the traditional group picture was taking in Squaw Village, headed out for the final push to Heritage Plaza. Sure, 28 miles seems like a long way to go on a skateboard, and it is! But when you have a great group of people around you giving out nothing but positive energy, it makes this physical feat easy.

As everyone was winding down and stretching out, announcements were made to recognize the top fundraisers. Mitten United took the TOP TEAM fundraising spot bringing in over $2,000…again! We were able to pass our goal and aid B4BC in reaching their goal of $20,000!!! 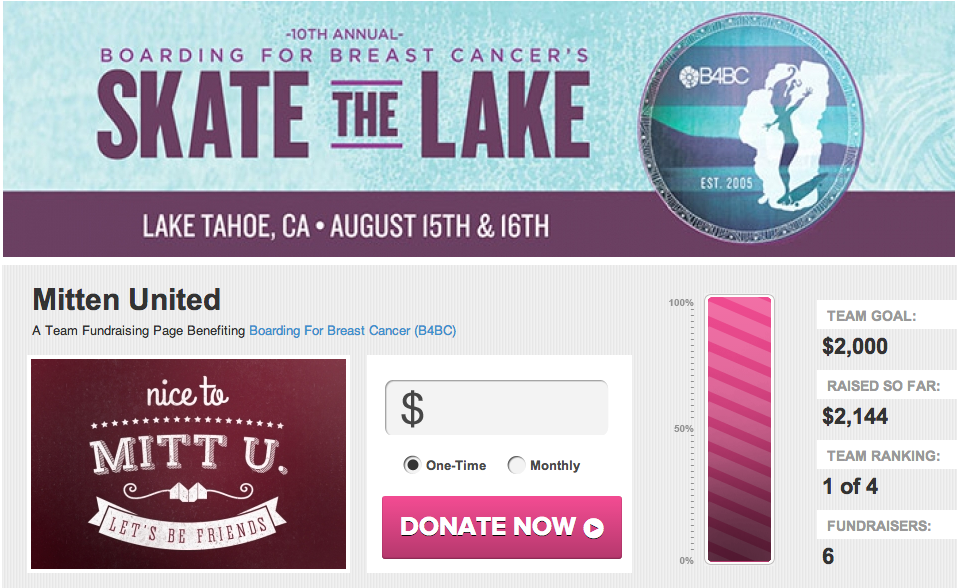 Danny, Stace, Nate, and I made the drive back on Sunday, but not before the entire Mitten Crew checked out Emerald Bay, and hiked down to an insanely cool spot on Eagle Falls. Even the famous Maverick Danger came on the hike!

This year Tahoe was a very inspiring journey. So much so that Shane and Melissa stayed an extra week because, well, why not? In doing so, I think SH has acquired one of the best mobile office pictures, showing off our Beats by Dre headphones from B4BC for raising over $500.

Big thanks to everyone at B4BC for making this event happen, and a HUGE thanks to all of you who helped Mitten United raise this money for this great cause. I really believe it is this generation that will stomp out this devastating disease. We can be the change.